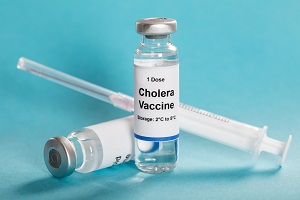 History of severe allergic reaction (eg, anaphylaxis) to any vaccine ingredient or to a previous dose of any cholera vaccine

- Safety and effectiveness have not been established in immunocompromised persons

- Viral shedding may occur in the stool of recipients for at least 7 days; potential for transmission of the vaccine strain to nonvaccinated close contacts (eg, household contacts); caution when considering whether to administer to individuals with immunocompromised close contacts

- Because of potential transmission of vaccine strain, vaccinees should take precautions (i.e., thorough and frequent handwashing, especially after bowel movements and before preparing and handling food) for ≥14 days after vaccination

-For oral administration only

Safe - has not been found to be teratogenic

Not absorbed systemically following oral administration, and maternal use is not expected to result in fetal exposure to the drug.

Vaccine strain may be shed in the stool of the vaccinated mother for at least 7 days, with a potential for transmission from mother to infant during vaginal delivery.

Not absorbed systemically by the mother following oral administration, and breastfeeding is not expected to result in exposure of the child