Entrectinib is used in adults to treat non-small cell lung cancer that has spread to other parts of the body (metastatic).

Entrectinib is also used in adults and children at least 12 years old who have solid tumors that have spread or cannot be safely removed with surgery, or when other treatments have failed or are not safe options. 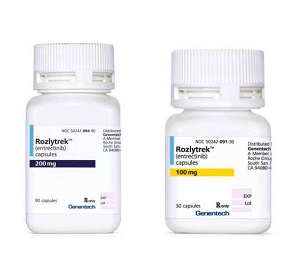 Entrectinib and its active metabolite suppress several pathways which contribute to cell survival and proliferation. This suppression shifts the balance in favor of apoptosis thereby preventing cancer cell growth and shrinking tumors.

<12 years: Safety and efficacy not established

-Based on literature reports in humans with congenital mutations leading to changes in TRK signaling, findings from animal studies, and its mechanism of action, fetal harm may occur when administered to a pregnant woman

- CHF occurred in clinical trials.Among patients with CHF, median time to onset was 2 months.Myocarditis in the absence of CHF was also documented

- monitor liver tests every 2 weeks during the first month of treatment, then monthly thereafter, and as clinically indicated

- Assess QT interval and electrolytes at baseline and periodically during treatment

- Grapefruit products are CYP3A4 inhibitors; avoid these products during treatment

- Select patients for treatment based on the following:

- Take orally with or without food

-This drug can harm a developing fetus.

-Verify negative pregnancy status in females of reproductive potential prior to initiating therapy.

-If this drug is used during pregnancy, or if the patient becomes pregnant while taking this drug, the patient should be apprised of the potential harm to the fetus.

-Advise female patients of reproductive potential to use effective contraception during therapy and for at least 5 weeks after.

-Advise male patients with female partners of reproductive potential to use effective contraception during therapy and for 3 months after.

-The effects in the nursing infant are unknown.
-Because of the potential for adverse reactions in breastfed infants from this drug, advise lactating women to discontinue breastfeeding during therapy and for 7 days after.