Omastaxin is a semi-synthetic form of a natural alkaloid found in the leaves of various species of Asian evergreen trees.Omastaxin is used as a treatment for patients with chronic myeloid leukemia who are resistant to or intolerant to tyrosine kinase inhibitors. 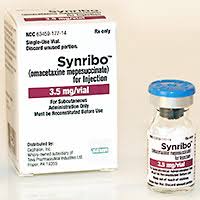 Major route of elimination not known; following sub-Q administration, approximately 12–15% of a dose is excreted unchanged in urine.

Omastaxin is used as a treatment for patients with chronic myeloid leukemia who are resistant to or intolerant to tyrosine kinase inhibitors.

Bone marrow suppression:
Bone marrow suppression is generally reversible and decreases with a decrease in number or delay in drug administration days. Monitor CBC regularly (weekly during initial drug administration to achieve maintenance dose and then every two weeks).
Dosage adjustment may be necessary in case of severe blood toxicity.
Bleeding:
Risk of bleeding, including potentially fatal CNS or GI bleeding, usually associated with severe thrombocytopenia. Platelet counts are recommended as part of a routine CBC monitoring program.
Hyperglycemia:
There is a risk of intolerance to glucose and blood sugar. A grade 3 or 4 increase in blood sugar has been reported in clinical trials. Monitor blood glucose levels frequently, especially in patients with diabetes mellitus. Consume in patients with uncontrolled diabetes. Avoid until your blood sugar is well controlled.
Complications and fetal / infant mortality
May cause fatal fetal harm. Fetal toxicity has been shown in animals.
If used during pregnancy or if the patient becomes pregnant, estimate the potential risk to the fetus.

Tell your doctor if you have any of the following problems:
Diabetes; Bleeding or blood clotting disorder. Or if you are pregnant or you may become pregnant.
Do not use amatoxin if you are pregnant. This can harm the unborn baby. Use an effective method of contraception to prevent pregnancy during treatment with omastaxine. Follow your doctor's instructions for how long to prevent pregnancy after your treatment

May cause fetal harm. Fetal toxicity has been shown in animals.

It is not known if this medicine is distributed in milk. Stop breast-feeding or taking the medicine.