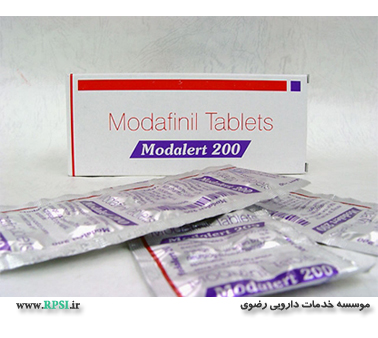 Unknown; may increase dopamine level in the brain by binding to the dopamine transporter and inhibiting dopamine reuptake.

Modafinil has wake-promoting actions like amphetamins contain sympathomimetic effect although the pharmacologic profile is not identical to that of sympathomimetic amines.

It does not change the release of dopamine and norepinephrine in order to stimulate the central nervous system, and it does not make sense of pleasure and Euphoria.

Metabolism:  metabolized in liver and main metabolic of it is acid modafinil, that is in active

In the treatment of daily sleepiness associated with narcoleptic syndrome and obstructive sleep apnea, administered orally at a dose of 200 to 400 mg per/ day in two divided doses in the morning and midday or as a single dose in the morning.

To treat shift work sleep disorder , a single dose of 200 mg can be taken one hour before start to work.

In the elderly, the initial dose is 100 mg / day should be prescribed, adjusted if necessary.

Cautions:  use with caution in severehepatic impairment , elderly history of depression, psychosis or mania .risk of skin reactions and discountinue if rash or other hypersensitivity reactions or angioedema or anaphylaxis occur.