Blonanserin is an atypical antipsychotic approved in Japan in January, 2008. It offers improved tolerability as it lacks side effects such as extrapyramidal symptoms, excessive sedation, or hypotension. As a second-generation (atypical) antipsychotic, it is significantly more efficacious in the treatment of the negative symptoms of schizophrenia compared to first-generation (typical) antipsychotics. 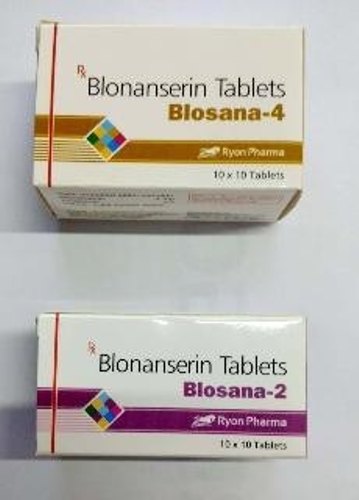 Blonanserin binds to and inhibits dopamine receptors D2 and D3 as well as the serotonin receptor 5-HT2A with high affinity 2. Blonanserin has low affinity for other dopamine and serotonin receptors as well as muscarinic, adrenergic, and histamine receptors. This reduces dopaminergic and serotonergic neurotransmission which is thought to produce a reduction in positive and negative symptoms of schizophrenia respectively.

Blonanserin has a Tmax of 1.5 h and a bioavailablity of 55% 1,2. Tmax has been observed to be prolonged and relative bioavailability increased when administered with food 1.

Blonanserin is over 99.7% bound to plasma proteins 2 . Serum albumin is the primary binder.

Blonanserin is mainly metabolized by CYP3A4 2. It undergoes hydoxylation of the cyclooctane ring as well as N-oxidation and N-deethylation of the piperazine ring. The N-deethylated and hydroxylated metabolites are active but to a lesser degree than the parent drug.
Route of elimination


Esophageal dysmotility and aspiration have been associated with antipsychotic use

Disruption of body temperature regulation has been attributed to antipsychotic agents