Ambrisentan is an orally active selective type A endothelin receptor antagonist indicated for the treatment of pulmonary arterial hypertension. It is approved in Europe, Canada and the United States for use as a single agent to improve exercise ability and delay clinical worsening. In addition, it is approved in the United States for use in combination with tadalafil to reduce the risks of disease progression, hospitalization and to improve exercise ability. Studies establishing the efficacy of Ambrisentan included patients with both idiopathic or heritable pulmonary arterial hypertension and those with pulmonary arterial hypertension associated with connective tissue diseases. Patients studied displayed symptoms and etiologies predominantly of WHO Functional Class II-III. As an endothelin receptor antagonist, Ambrisentan prevents endogenous endothelin peptide from constricting the muscles in blood vessels, allowing them to relax and permit a reduction in blood pressure. 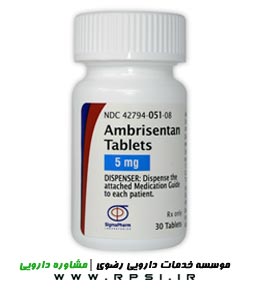 Endothelin-1 (ET-1) is an endogenous peptide that acts on the endothelin type A (ETA) and endothelin type B (ETB) receptors in vascular smooth muscle and endothelium. ETA-mediated actions include vasoconstriction and cell proliferation, whereas ETB predominantly mediates vasodilation, anti-proliferation, and ET-1 clearance. In patients with pulmonary arterial hypertension, ET-1 levels are increased and correlate with increased right arterial pressure and severity of disease. Ambrisentan is one of several newly developed vasodilator drugs that selectively target the endothelin type A (ETA) receptor, inhibiting its action and preventing vasoconstriction. Selective inhibition of the ETA receptor prevents phospholipase C-mediated vasoconstriction and protein kinase C-mediated cell proliferation. Endothelin type B (ETB) receptor function is not significantly inhibited, and nitric oxide and prostacyclin production, cyclic GMP- and cyclic AMP-mediated vasodilation, and endothelin-1 (ET-1) clearance is preserved.

Ambrisentan is rapidly absorbed with peak plasma concentrations occuring around 2 hours after oral administration. Cmax and AUC increase proportionally with dose across the therapeutic dosing range. Absolute oral bioavailability of ambrisentan is unknown. Absorption is not affected by food.

Ambrisentan has a low distribution into red blow cells, with a mean blood:plasma ratio of 0.57 and 0.61 in males and females, respectively.

Ambrisentan is 99% plasma protein bound, primarily to albumin (96.5%) and to a lesser degree alpha1-acid glycoprotein.

Ambrisentan has a terminal half-life of 15 hours. It is thought that steady state is achieved after around 4 days of repeat-dosing.

The mean oral clearance of ambrisentan was found to be 38 mL/min in healthy subjects and 19 mL/min in patients with pulmonary artery hypertension.

Pulmonary arterial hypertension: Treatment of pulmonary artery hypertension (PAH) (World Health Organization [WHO] Group I) to improve exercise ability and delay clinical worsening; in combination with tadalafil to reduce the risks of disease progression and hospitalization for worsening PAH, and to improve exercise ability. Studies establishing effectiveness included predominantly patients with WHO Functional Class II to III symptoms and etiologies of idiopathic or heritable PAH (60%) or PAH associated with connective tissue diseases (34%).

Get emergency medical help if you have signs of an allergic reaction: hives; difficulty breathing; swelling of your face, lips, tongue, or throat.
Call your doctor at once if you have:
severe shortness of breath, wheezing, cough with foamy mucus, chest pain;
swelling, tiredness, rapid weight gain;
low red blood cells (anemia)--pale skin, unusual tiredness, feeling light-headed or short of breath, cold hands and feet; or
liver problems--loss of appetite, stomach pain (upper right side), nausea, vomiting, fever, itching, dark urine, clay-colored stools, jaundice (yellowing of the skin or eyes).
Common side effects may include:
swelling in your hands, legs, ankles, or feet;
stuffy nose, sinus pain; or
hot flashes, redness in your face.

• Fluid retention/peripheral edema: Development of peripheral edema due to treatment and/or disease state (pulmonary arterial hypertension) may occur; a higher incidence is seen with concomitant use of tadalafil and in elderly patients. There have also been postmarketing reports of fluid retention requiring treatment (eg, diuretics, fluid management, hospitalization). Further evaluation may be necessary to determine cause and appropriate treatment or discontinuation of therapy.

• Hematologic changes: A reduction in hematocrit/hemoglobin may be observed within the first few weeks of therapy with subsequent stabilization of levels. Hemoglobin reductions >15% have been observed in some patients. Measure hemoglobin prior to initiating therapy, at 1 month, and periodically thereafter. Significant decreases in hemoglobin in the absence of other causes may warrant the discontinuation of therapy. Use not recommended in patients with clinically significant anemia.

• Hepatic effects: Increases in serum liver aminotransferases have been reported during postmarketing use; however, in the majority of the cases, alternative causes of hepatotoxicity could be identified. Perform liver enzyme testing when clinically indicated. Discontinue therapy if signs/symptoms of hepatic injury appear, if serum liver aminotransferases >5 times ULN (US labeling) or >3 times ULN (Canadian labeling) are observed, or if aminotransferases are increased in the presence of bilirubin >2 times ULN. Hepatotoxicity has been reported with other endothelin receptor antagonists (eg, bosentan); however, ambrisentan may be tried in patients that have experienced asymptomatic increases in liver enzymes caused by another endothelin receptor antagonist after the liver enzymes have returned to normal.

Do not use ambrisentan if you are pregnant or think you might be pregnant. This medicine can cause serious birth defects. Tell your doctor right away if you miss a menstrual period or think you may have become pregnant.
You will need to have a negative pregnancy test before starting this treatment. You will be re-tested every month during your treatment, and 1 month after your last dose.

Ambrisentan is contraindicated in pregnancy.