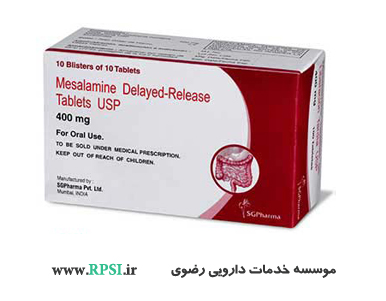 The mechanism of action of Mesalazine (and sulfasalazine) is unknown. it is possible that Mesalazine diminishes inflammation by blocking cyclooxygenase and inhibiting prostagladin (PG) production in the colon.

20 to 30% absorbed following oral administration. 10 to 35% absorbed from the colon (rectal suppository).
About 80% of N-Ac-5-ASA is bound to plasma proteins Rapidly and extensively metabolized, mainly to N-acetyl-5-ASA (Ac-5-ASA) in the intestinal mucosal wall and the liver.
Approximately 28% of the Mesalazine in Asacol tablets is absorbed after oral ingestion, leaving the remainder available for topical action and excretion in the feces.
It is excreted mainly by the kidney as N-acetyl-5-aminosalicylic acid . At steady state, the mean elimination half-life was seven hours for both 5-ASA and N-acetyl-5-ASA.

1- Capsules may be taken without regard to meals.
2- should not be coadministered with antacids (coating of granules depends on pH for dissolution)
3- Monitoring: Renal function in all patients (before starting and periodically during therapy)