Selinexor is used to treat multiple myeloma in adults. Selinexor is given together with a steroid medicine called dexamethasone.
Selinexor is also used in adults to treat certain types of diffuse large B-cell lymphoma.
Selinexor is given after other specific medications did not work or have stopped working.
Selinexor was approved by the US Food and Drug Administration (FDA) on an "accelerated" basis. In clinical studies, some people responded to selinexor, but further studies are needed. 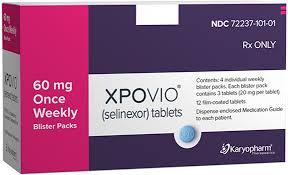 elinexor binds to and inhibits exportin-1 (XPO1). XPO1 is a nuclear exporter protein which contains a pocket to which nuclear proteins can bind. When complexed with these proteins and Ran, activated through guanosine triphosphate (GTP) binding, the XPO1-protein-Ran-GTP complex is able to exit the nucleus through a nuclear pore. Once outside, GTP is hydrolyzed and the complex dissociates. The inhibition of this process in cancer cells allows the targets of XPO1, many of which are tumor suppressors, to collect in the nucleus and result in increased transcription of tumor suppressor genes. Tumor suppressor proteins known to be affected by XPO1 inhibition include p53, p73, adenomatous polyposis coli, retinoblastoma, forkhead box protein O, breast cancer, nucleophosmin, and merlin. Regulators of cell cycle progression are also affected, namely p21, p27, galectin-3, and Tob. Inhibitor of NFκB also collects in the nucleus as a result leading to reduced activity of NFκB, a known contributor to cancer. XPO1 participates in the formation of a complex with eukaryotic initiation factor 4E and contributes to the transport of messenger RNA for several oncegenes including cell cycle promotors, cyclin D1, cyclin E, and CDK2/4/6, as well as antiapoptotic proteins, Mcl-1 and Bcl-xL.4 These wide ranging changes in protein expression and gene transcription culminate in cell cycle arrest and the promotion of apoptosis in cancer cells.

Not assigned
Based on animal studies and its mechanism of action, selinexor can cause fetal harm if administered to pregnant women
Verify pregnancy status of females of reproductive potential before initiating selinexor

No data are available regarding the presence of selinexor or its metabolites in human milk, or their effects on the breastfed child or milk production
Because of the potential for serious adverse reactions in breastfed children, advise women not to breastfeed during treatment and for 1 week after the last dose