It is used to treat a type of stomach, bowel, or esophagus cancer. 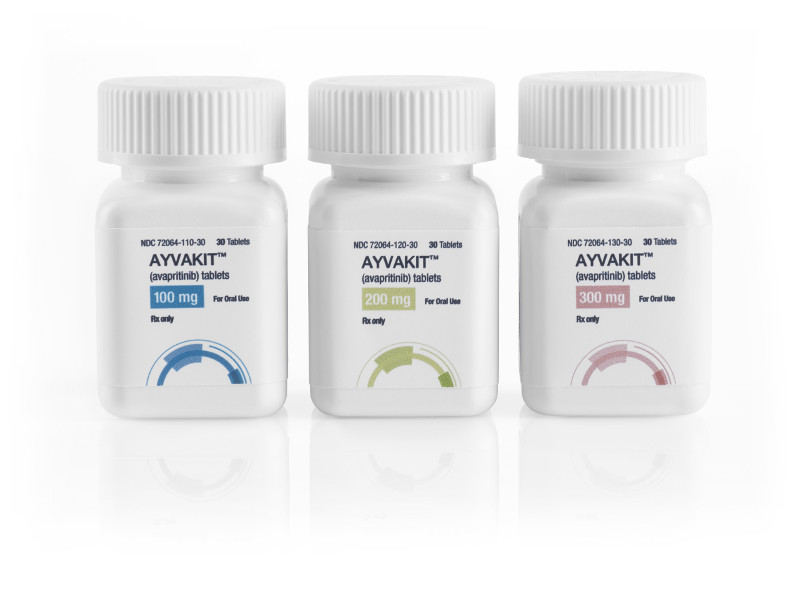 Avapritinib is a selective kinase inhibitor that negatively modulates the action of cell transporters to resensitize them to other chemotherapies. It has a long duration of action as it is given once daily. Patients should be counselled regarding the risk of intracranial hemorrhage, CNS effects, and embryo-fetal toxicity.

absorption: A 300mg oral dose of avapritinib reaches a Cmax of 813ng/mL with a Tmax of 2.0-4.1h and an AUC of 15400h*ng/mL.
volume of distribution:The mean apparent volume of distribution is 1200L.
protein binding:Avapritinib is 98.8% protein bound in serum.
metabolism: Avapritinib is metabolized mainly by CYP3A4 and CYP2C9 in vitro.A 310mg oral dose is recovered as 49% unchanged drug, 35% hydroxy glucuronide metabolite, and 14% oxidatively deaminated metabolite.
Route of elimination:Avapritinib is 70% eliminated in the feces with 11% as the unchanged drug and 18% eliminated in the urine with 0.23% as the unchanged drug.
half-life: The half life of avapritinib is 32-57h.

Intracranial hemorrhage (eg, subdural hematoma, intracranial hemorrhage, cerebral hemorrhage) occurred
A broad spectrum of CNS adverse reactions were reported; these include cognitive impairment, dizziness, sleep disorders, mood disorders, speech disorders, and hallucinations
Based on findings from animal studies and its mechanism of action, fetal harm can occur when administered to pregnant women
Drug interaction overview
Avapritinib is a CYP3A4 and a CYP2C9 substrate
Strong and moderate CYP3A inhibitors
Coadministration with a strong or moderate CYP3A inhibitor increases avapritinib plasma concentrations, which may increase the incidence and severity of adverse reactions of avapritinib
Strong and moderate CYP3A inducers
Coadministration with a strong or moderate CYP3A inducer decreases avapritinib plasma concentrations, which may decrease efficacy of avapritinib

Based on findings from animal studies and its mechanism of action, fetal harm may occur when administered to a pregnant woman

No data available on use in pregnant women

Verify pregnancy status of females of reproductive potential before initiation