Florbetapir (18F) is a radiopharmaceutical compound containing the radionuclide fluorine-18 bound to the compound florbetapir, a molecule that binds with high affinity to beta amyloid plaque, a peptide that plays a key role in Alzheimer's Disease pathogenesis. Marketed as the product Amyvid, florbetapir 18F is indicated for positron emission tomography (PET) imaging of the brain to estimate β-amyloid neuritic plaque density in adult patients with cognitive impairment who are being evaluated for Alzheimer's Disease (AD) and other causes of cognitive decline.

The radionucleide fluorine-18 was chosen as it has a half life of 110 minutes allowing it to accumulate sufficiently in the brain before undergoing positon emission decay. 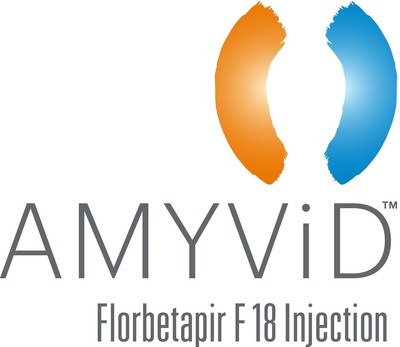 Following intravenous injection, florbetapir F 18 diffuses across the human blood-brain barrier and produces a radioactivity signal detectable throughout the brain. Subsequently, cerebral perfusion decreases the brain florbetapir F 18 content, with differential retention of the drug in areas that contain β-amyloid aggregates compared to areas that lack the aggregates.

<5% of the injected F 18 radioactivity present in the blood by 20 minutes following administration, and less than 2% present by 45 minutes after administration
Metabolism

The residual F 18 in circulation during the 30-90 minute imaging window was principally in the form of polar F 18 metabolites. Essentially all radioactivity collected in the urine was present as polar metabolites of florbetapir F 18. Three metabolites have been discovered and identified as [18F]AV-160 (desmethyl-[18F]AV-45), [18F]AV-267 (N-acetyl–[18F]AV-160), and an [18F]-Polar species, the identity of which has not been confirmed. Additionally, although metabolites may make some contribution to signal detection, particularly to the nontarget activity, it is concluded that there will be minimal interference from these radiolabeled metabolites to the amyloid target binding in the [18F]AV-45 brain PET image

The patient should be supine; position head to center the brain, including the cerebellum, in the PET scanner field of view

Must not be diluted

Use aseptic technique and radiation shielding to withdraw solution

Assay the dose in a suitable dose calibrator prior to administration

Inject through a short IV catheter (~1.5 inches or less) to minimize the potential for adsorption of the drug to the catheter

Portions of the dose may adhere to longer catheters

Not to exceed 50 mcg mass dose

The product does not contain a preservative

Store within the original container or equivalent radiation shielding

There are no available data on use in pregnant women to evaluate for a drug-associated risk of major birth defects, miscarriage, or adverse maternal or fetal outcomes

If considering administration to a pregnant woman, inform patient about potential for adverse pregnancy outcomes based on radiation dose from drug and gestational timing of exposure

To decrease radiation exposure to breastfed infant, advise a lactating woman to interrupt breastfeeding, and pump and discard breast milk for 24 hours after administration of drug