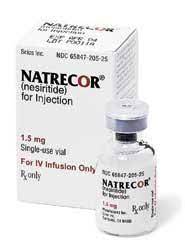 Dosing: Adult
Acute decompensated heart failure: IV: Initial: 2 mcg/kg (bolus optional); followed by continuous infusion at 0.01 mcg/kg/minute. Note: Should not be initiated at a dosage higher than initial recommended dose. There is limited experience with increasing the dose >0.01 mcg/kg/minute; in one trial, a limited number of patients received higher doses that were increased no faster than every 3 hours by 0.005 mcg/kg/minute (preceded by a bolus of 1 mcg/kg), up to a maximum of 0.03 mcg/kg/minute. Increases beyond the initial infusion rate should be limited to selected patients and accompanied by close hemodynamic and renal function monitoring.
Patients experiencing hypotension during the infusion: Infusion dose should be reduced or discontinued. Other measures to support blood pressure should be initiated (eg, IV fluids, Trendelenburg position). Hypotension may be prolonged (up to hours); once patient is stabilized, may attempt to restart at a lower dose (reduce previous infusion
dose by 30% and omit bolus).
Dosing: Geriatric
Refer to adult dosing. Older individuals may be more sensitive to the effect of nesiritide than younger patients.

Hypersensitivity to natriuretic peptide or any component of the formulation; cardiogenic shock (when used as primary therapy); hypotension (persistent systolic blood pressure <100 mm Hg) prior to therapy

IV: Do not administer through a heparin-coated catheter (concurrent administration of heparin via a separate catheter is acceptable, per manufacturer).
Prime IV tubing with 5 mL of infusion prior to connection with vascular access port and prior to administering bolus or starting the infusion. Withdraw bolus from the prepared infusion bag and administer over 60 seconds. Begin infusion immediately following administration of the bolus.

Adverse events were not observed in an animal reproduction study.