Treating urinary tract infections caused by certain bacteria. Nalidixic acid is an antibacterial. It works by killing sensitive bacteria in the urinary tract by stopping the production of essential proteins needed by the bacteria to survive. 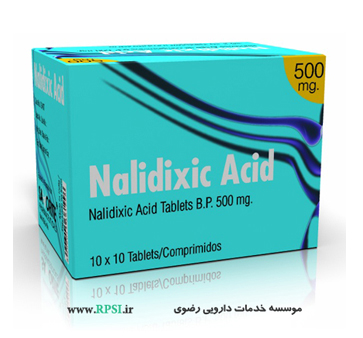 Evidence exists for Nalidixic acid that its active metabolite, hydroxynalidixic acid, binds strongly, but reversibly, to DNA, interfering with synthesis of RNA and, consequently, with protein synthesis.

Following oral administration, of nalidixic acid is rapidly absorbed from the gastrointestinal tract, partially metabolized in the liver, and rapidly excreted through the kidneys.
Unchanged nalidixic acid appears in the urine along with an active metabolite, hydroxynalidixic acid, which has antibacterial activity similar to that of nalidixic acid.

1- Blood counts and renal and liver function tests should be performed periodically if treatment is continued for more than two weeks.
2- Moderate to severe phototoxicity reactions have been observed in patients who are exposed to direct sunlight while receiving Nalidixic acid or other members of this drug class. Excessive sunlight should be avoided. Therapy should be discontinued if phototoxicity occurs.
3- Caution should be observed in patients with glucose-6-phosphate dehydrogenase deficiency.
4- Patients should be advised nalidixic acid may be taken with or without meals. Patients should be advised to drink fluids liberally and not take antacids.