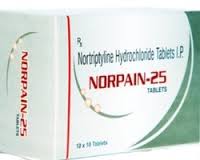 The mechanism of mood elevation by tricyclic antidepressants is at present unknown. Studies suggest that Nortriptyline hydrochloride interferes with the transport, release, and storage of catecholamines

Similar to protriptyline, nortriptyline is a tricyclic antidepressant of the dibenzocycloheptene type and is the active metabolite of amitriptyline.

Well absorbed from the GI tract. Peak plasma concentrations occur 7-8.5 hours following oral administration. Highly protein-bound in plasma and tissues. Undergoes hepatic metabolism via the same pathway as other TCAs. Approximately one-third of a single orally administered dose is excreted in urine within 24 hours. Small amounts are excreted in feces via biliary elimination. Half life:16 to 90+ hours.

1-Antidepressants increased the risk compared to placebo of suicidal thinking and behavior (suicidality) in children, adolescents, and young adults in short-term studies of major depressive disorder (MDD) and other psychiatric disorders 2-It should be noted that Nortriptyline hydrochloride is not approved for use in treating bipolar depression. 3-The pupillary dilation that occurs following use of many antidepressant drugs including Nortriptyline hydrochloride may trigger an angle-closure attack in a patient with anatomically narrow angles who does not have a patent iridectomy.

1-Patients, their families, and their caregivers should be encouraged to be alert to the emergence of anxiety, agitation, panic attacks, insomnia, irritability, hostility, aggressiveness, impulsivity, akathisia (psychomotor restlessness), hypomania, mania, other unusual changes in behavior, worsening of depression, and suicidal ideation, especially early during antidepressant treatment and when the dose is adjusted up or down 2-Patients should be advised that taking Nortriptyline hydrochloride can cause mild pupillary dilation, which in susceptible individuals, can lead to an episode of angle-closure glaucoma.