A vasoconstrictor found in ergot of Central Europe. It is an alpha-1 selective adrenergic agonist and is commonly used in the treatment of migraine disorders . 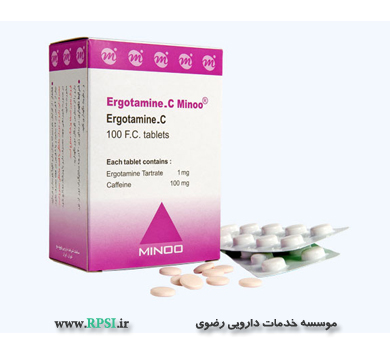 Stimulates alpha receptors to vasoconstrict vessels with low vascular tone; vasodilates hypertonic vessels; at higher doses competes for alpha receptor to block it. The molecule shares structural similarity with neurotransmitters such as serotonin, dopamine, and epinephrine and can thus bind to several receptors acting as an agonist.
The anti-migraine effect is due to constriction of the intracranial extracerebral blood vessels through the 5-HT1B receptor, and by inhibiting trigeminal neurotransmission by 5-HT1D receptors. Ergotamine also has effects on the dopamine and norepinephrine receptors. Its side effects are due mainly to its action at the D2 dopamine and 5-HT1A receptors.

• Ergotamine is a vasoconstrictor and alpha adrenoreceptor antagonist. The pharmacological properties of ergotamine are extremely complex; some of its actions are unrelated to each other, and even mutually antagonistic.
• The drug has partial agonist and/or antagonist activity against tryptaminergic, dopaminergic and alpha adrenergic receptors depending upon their site, and it is a highly active uterine stimulant.
• It causes constriction of peripheral and cranial blood vessels and produces depression of central vasomotor centers. The pain of a migraine attack is believed to be due to greatly increased amplitude of pulsations in the cranial arteries, especially the meningeal branches of the external carotid artery.
• Ergotamine reduces extracranial blood flow, causes a decline in the amplitude of pulsation in the cranial arteries, and decreases hyperperfusion of the territory of the basilar artery. It does not reduce cerebral hemispheric blood flow.

Serious and/or life threatening peripheral ischemia has been reported with coadministration of this drug with potent CYP3A4 inhibitors (including protease inhibitors and macrolide antibiotics). Because CYP3A4 inhibition elevates the serum levels of ergotamine, the risk of vasospasm leading to cerebral ischemia and/or ischemia of the extremities is increased. Concurrent use of these drugs is contraindicated.
Cautions
- Should be initiated at first sign of vascular headache
- Ineffective for muscle contraction headache
- Discontinue if S/S of impaired circulation
- Possibility of retroperitoneal and pleuropulmonary fibrosis; paresthesia; GI disturbance; chest pain
- May exacerbate heart failure
- Safety/efficacy not established for peds

• Ergotamine may cause dizziness. This effect may be worse if you take it with alcohol or certain medicines. Use ergotamine with caution. Do not drive or perform other possibly unsafe tasks until you know how you react to it.
• Do NOT take more than the recommended dose or use for longer than prescribed without checking with your doctor.
• Use ergotamine with caution in the ELDERLY; they may be more sensitive to its effects.
• Ergotamine should not be used in CHILDREN; safety and effectiveness in children have not been confirmed.
• PREGNANCY and BREAST-FEEDING: Do not use ergotamine if you are pregnant. It may cause harm to the fetus. Avoid becoming pregnant while you are taking it. If you think you may be pregnant, contact your doctor right away. Ergotamine is found in breast milk. Do not breast-feed while taking ergotamine.