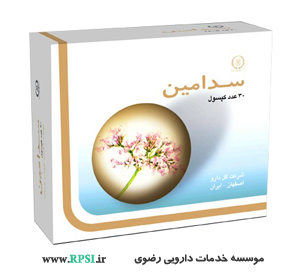 In the animal studies, sedative properties have been documented for valerian which have been attributed to both the volatile oil and valepotriate fractions . Further studies showed that valerenic acid acts as a general CNS depressant similar to phenobarbitone . Biochemical studies have documented that valerenic acid inhibits the enzyme system responsible for the central catabolism of GABA Increased concentration of GABA are associated with a decrease in CNS activity and this action may , therefore , be involved in the reported sedative activity of valerenic acid . Valernal and valerinic acid are the most active sedative components of valerian A number of documented studies have described a sedative effect for valerian in human. Valerian has been reported to be more effective than diazepam in treating symptoms of anxiety , given to 100 patients for two weeks in a double blind trial

One to two capsules per day

Pregnancy , Lactation , hypersensitivity to drug or its components.

1-The documented CNS depressant activity of Valerian may potentiate the existing sedative therapy . 2-

Safety of valerian during pregnancy and lactation has not yet been established and should therefore , be avoided .