Venlafaxine is an antidepressant in a group of drugs called selective serotonin andnorepinephrine reuptake inhibitors (SSNRIs). Venlafaxine affects chemicals in the brain that may become unbalanced and cause depression. 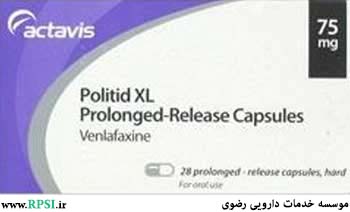 The exact mechanism of action of venlafaxine is unknown, but appears to be associated with the its potentiation of neurotrasmitter activity in the CNS. Venlafaxine and its active metabolite, O-desmethylvenlafaxine (ODV), inhibit the reuptake of both serotonin and norepinephrine with a potency greater for the 5-HT than for the NE reuptake process. Both venlafaxine and the ODV metabolite have weak inhibitory effects on the reuptake of dopamine but, unlike the tricyclics and similar to SSRIs, they are not active at histaminergic, muscarinic, or alpha(1)-adrenergic receptors.

Venlafaxine potentiates the neurotransmitter activity in the central nervous system. Furthermore, venlafaxine and its metabolite, O-desmethylvenlafaxine (ODV) potently inhibit the reuptake of serotonin and norepinephrine and weakly inhibit dopamine reuptake.

hypersensitivity to drug or its components. , Current or recent (within 2 weeks) therapy with MA , Uncontrolled hypertension , Concomitant with MAOIs

1-Patients with major depressive disorder (MDD), both adult and pediatric, may experience worsening of their depression and/or the emergence of suicidal ideation and behavior (suicidality) or unusual changes in behavior 2- Venlafaxine hydrochloride is not approved for use in treating bipolar depression. 3-The development of a potentially life-threatening serotonin syndrome has been reported with SNRIs and SSRIs, including Venlafaxine hydrochloride. 4-The pupillary dilation that occurs following use of many antidepressant drugs including Venlafaxine tablets may trigger an angle closure attack in a patient with anatomically narrow angles who does not have a patent iridectomy. 5-Venlafaxine treatment is associated with sustained increases in blood pressure in some patients.

1-Patients, their families, and their caregivers should be encouraged to be alert to the emergence of anxiety, agitation, panic attacks, insomnia, irritability, hostility, aggressiveness, impulsivity, akathisia (psychomotor restlessness), hypomania, mania, other unusual changes in behavior, worsening of depression, and suicidal ideation, especially early during antidepressant treatment and when the dose is adjusted up or down. 2- Patients may wish to be examined to determine whether they are susceptible to angle closure, and have a prophylactic procedure (e.g., iridectomy), if they are susceptible.