Esomeprazole is a proton pump inhibitor that decreases the amount of acid produced in the stomach. Esomeprazole is used to treat symptoms of gastroesophageal reflux disease (GERD) and other conditions involving excessive stomach acid such as Zollinger-Ellison syndrome.
Esomeprazole is also used to promote healing of erosive esophagitis Esomeprazole may also be given to prevent gastric ulcer caused by infection with helicobacter pylori (H. pylori), or by the use of nonsteroidal anti-inflammatory drugs (NSAIDs).
Esomeprazole is not for immediate relief of heartburn symptoms. 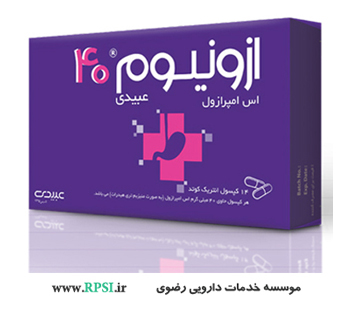 Esomeprazole is a proton pump inhibitor that suppresses gastric acid secretion by specific inhibition of the H+/K+-ATPase in the gastric parietal cell. By acting specifically on the proton pump, Esomeprazole blocks the final step in acid production, thus reducing gastric acidity.

Esomeprazole is a compound that inhibits gastric acid secretion

Absorption:90%. Protein binding: 97%.Metabolism: Mainly hepatic.
Esomeprazole is completely metabolized by the cytochrome P450 system. Less than 1% of the parent drug is excreted in urine. Approximately 80% of the administered dose of esomeprazole is excreted as metabolites in urine and the remaining 20% is excreted in feces. Half life: 1-1.5 hours

hypersensitivity to drug or its components. , in combination with antibacterial agents

1-Symptomatic response to therapy with esomeprazole magnesium delayed-release capsules do not preclude the presence of gastric malignancy.
2-Atrophic gastritis has been noted occasionally in gastric corpus biopsies from patients treated long-term with omeprazole, of which esomeprazole is an enantiomer.
3-Acute interstitial nephritis has been observed in patients taking PPIs including esomeprazole magnesium delayed-release capsules.
4-Daily treatment with any acid-suppressing medications over a long period of time (e.g., longer than 3 years) may lead to malabsorption of cyanocobalamin (vitamin B-12) caused by hypo- or achlorhydria. Rare reports of cyanocobalamin deficiency occurring with acid-suppressing therapy have been reported in the literature.

This drug should be taken at least one hour before meals.