Clarithromycin is a macrolide antibiotic. It fights bacteria in your body. Clarithromycin is used to treat many different types of bacterial infections affecting the skin and respiratory system. It is also used together with other medicines to treat stomach ulcers caused by Helicobacter pylori. 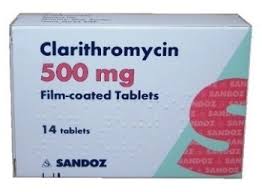 action Clarithromycin is first metabolized to 14-OH clarithromycin, which is active and works synergistically with its parent compound. Like other macrolides, it then penetrates bacteria cell wall and reversibly binds to domain V of the 23S ribosomal RNA of the 50S subunit of the bacterial ribosome, blocking translocation of aminoacyl transfer-RNA and polypeptide synthesis. Clarithromycin also inhibits the hepatic microsomal CYP3A4 isoenzyme and P-glycoprotein, an energy-dependent drug efflux pump.

Clarithromycin is a macrolide antibiotic whose spectrum of activity includes many gram-positive (Staphylococcus aureus, S. pneumoniae, and S. pyogenes) and gram-negative aerobic bacteria (Haemophilus influenzae, H. parainfluenzae, and Moraxella catarrhalis), many anaerobic bacteria, some mycobacteria, and some other organisms including Mycoplasma, Ureaplasma, Chlamydia, Toxoplasma, and Borrelia.

1-Clarithromycin SHOULD NOT BE USED IN PREGNANT WOMEN EXCEPT IN CLINICAL CIRCUMSTANCES WHERE NO ALTERNATIVE THERAPY IS APPROPRIATE 2-Hepatic dysfunction, including increased liver enzymes, and hepatocellular and/or cholestatic hepatitis, with or without jaundice, has been reported with Clarithromycin. 3-Clarithromycin has been associated with prolongation of the QT interval and infrequent cases of arrhythmia.