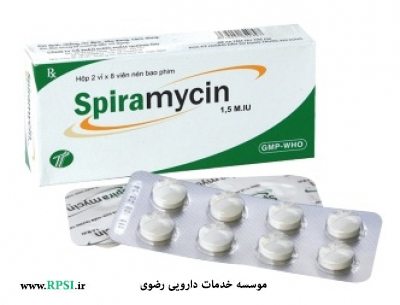 The mechanism of action of spiramycin is not clear ; however, it is thought to inhibiting protein synthesis and subsequent cell growth. It is primarily bacteriostatic, but may be bactericidal against more sensitive strains when used in high concentrations.

spiramycinis thought to reversibly bind to the 50 S subunit of bacterial ribosomes, resulting in blockage of the transpeptidation or translocation reactions, inhibiting protein synthesis and subsequent cell growth.

Distribution: Spiramycin is highly concentrated in tissues. Spiramycin crosses the placenta and is distributed into breast milk. Spiramycin does not cross the blood-brain barrier.

Protein binding: Low (10 to 25%).
Biotransformation: Spiramycin metabolism has not been well studied ; however, spiramycin is thought to be metabolized in the liver to active metabolites.

Note: Toxoplasmosis in pregnant women
First trimester: Oral, 3 grams (9,000,000 IU) per day, divided into three or four doses.
Second and third trimesters: Oral, 25 to 50 mg of pyrimethamine per day in combination with 2 to 3 grams of sulfadiazine per day and folinic acid 5 mg per day for three weeks, alternating with 3 grams (9,000,000 IU) of spiramycin , divided into three or four doses, for three weeks.

Hypersensitivity to spiramycin or other macrolids

» Taking on an empty stomach
» Compliance with full course of therapy
» Importance of taking medication on regular schedule and not missing doses
» Continue medicine for full time of treatment
» Proper dosing
Missed dose: taking as soon as possible; not taking if almost time for next dose; not doubling dose

Safe - has not been found to be teratogenic