Colchicine is an alkaloid obtained from the plant colchicum autumnale . This medication is used to prevent or treat gout attacks (flares) . Usually gout symptoms develop suddenly and involve only one or a few joints.
The big toe, knee, or ankle joints are most often affected. Colchicine works by decreasing swelling and lessening the build up of uric acid crystals that cause pain in the affected joint(s). This medication is also used to prevent attacks of pain in the abdomen, chest, or joints caused by a certain inherited disease (familial Mediterranean fever) 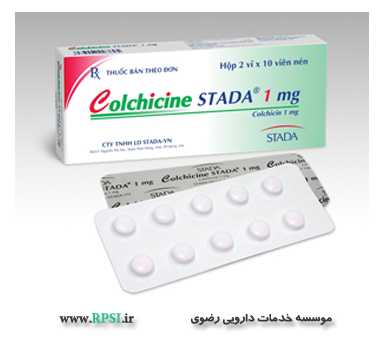 colchicines apparently interrupts the cycle of monosodium urate crystal deposition in joint tissues and the resultant inflammatory response that initiates and sustains an acute attack. Colchicine decreases leukocyte chemotaxis and phagocytosis and inhibits the formation and release of a chemotactic glycoprotein that is produced during phagocytosis of urate crystals.
Colchicine also inhibits urate crystal deposition, probably by inhibiting oxidation of glucose and subsequent lactic acid production in leukocytes. Colchicine inhibits microtubule assembly in various cells, including leukocytes, probably by binding to and interfering with polymerization of the microtubule subunit tubulin.

Colchicine is a highly poisonous alkaloid, originally extracted from plants of the genus Colchicum. Its present medicinal use is mainly in the treatment of gout.Gout is caused by too much uric acid in the blood. When uric acid levels in the blood are too high, the uric acid may form hard crystals in your joints.
It is being investigated for its potential use as an anti-cancer drug. It can also be used as initial treatment for pericarditis and preventing recurrences of the condition.

• Absorption
- Colchicine is rapidly absorbed after oral administration, probably from the jejunum and ileum.
- Absolute bioavailability is reported to be approximately 45%.
Volume of distribution
5 to 8 L/kg
• Distribution
Colchicine binding to serum protein is about 39%, primarily to albumin.
Colchicine crosses the placenta and distributes into breast milk.
• Metabolism
- Probably hepatic. about 16% of colchicine is metabolized to 2-O
demethylcolchicine and 3-O-demethylcolchicine by CYP3A4.
- Glucuronidation is also believed to be a metabolic pathway for colchicine.
• Half life
Elimination half-life is approximately 1 hour.
• Excretion
40 to 65% of the total absorbed dose of colchicine was recovered unchanged in urine. Enterohepatic recirculation and biliary excretion are also believed to play a role in colchicine elimination.

Colchicine has a narrow therapeutic window. The administration should be discontinued if toxic symptoms such as nausea, vomiting, abdominal pain, diarrhoea occur.
Colchicine may cause severe bone marrow depression (agranulocytosis, aplastic anaemia, thrombocytopenia). The change in blood counts may be gradual or very sudden. Aplastic anaemia in particular has a high mortality rate. Periodic checks of the blood picture are essential.
If patients develop signs or symptoms that could indicate a blood cell dyscrasia, such as fever, stomatitis, sore throat, prolonged bleeding, bruising or skin disorders, treatment with colchicine should be immediately discontinued and a full haematological investigation should be conducted straight away.
Caution is advised in case of:
• liver or renal impairment
• cardiovascular disease
• gastrointestinal disorders
• elderly and debilitated patients
• patients with abnormalities in blood counts
Co-administration with P-gp inhibitors and/or moderate or strong CYP3A4 inhibitors will increase the exposure to colchicine, which may lead to colchicine induced toxicity including fatalities.
This medicinal product contains lactose. Patients with rare hereditary problems of galactose intolerance, the Lapp lactase deficiency or glucose-galactose malabsorption should not take this medicine.
Colchicine can be toxic when ingested, inhaled, or absorbed in the eyes. Colchicine can cause a temporary clouding of the cornea and be absorbed into the body, causing systemic toxicity.
Symptoms of colchicines overdose start 2 to 24 hours after the toxic dose has been ingested and include burning in the mouth and throat, fever, vomiting, diarrhea, and abdominal pain. This can cause hypovolemic shock due to extreme vascular damage and fluid loss through the gastrointestinal tract, which can be fatal.
No specific antidote for colchicines is known, but supportive care is used in cases of overdose. In the immediate period after an overdose, monitoring for gastrointestinal symptoms, cardiac dysrhythmias, and respiratory depression is appropriate.