Clomipramine is a tricyclic antidepressant. It affects chemicals in the brain that may be unbalanced. Clomipramine is used to treat symptoms of obsessive-compulsive disorder (OCD) such as recurrent thoughts or feelings and repetitive actions. 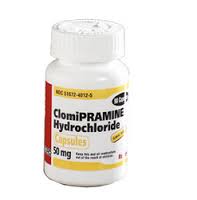 The actual neurochemical mechanism is unknown, but CMI's capacity to inhibit the reuptake of serotonin (5-HT) is thought to be important.

Clomipramine (CMI) is presumed to influence obsessive and compulsive behaviors through its effects on serotonergic neuronal transmission.

Well absorbed from the GI tract following oral administration. Bioavailability is approximately 50% orally due to extensive first-pass metabolism. Bioavailability is not affected by food. Peak plasma concentrations occurred 2-6 hours following oral administration of a single 50 mg dose. Clomipramine is approximately 97-98% bound to plasma proteins, principally to albumin and possibly to α1-acid glycoprotein. Extensively metabolized in the liver. Route of elimination:Urine (51-60%) and feces via biliary elimination (24-32%) the average elimination half-life of clomipramine was 32 hours

1-Antidepressants increased the risk compared to placebo of suicidal thinking and behavior (suicidality) in children, adolescents, and young adults in short-term studies of major depressive disorder (MDD) and other psychiatric disorders. 2-It should be noted that clomipramine hydrochloride is not approved for use in treating bipolar depression 3-The pupillary dilation that occurs following use of many antidepressant drugs including clomipramine may trigger an angle closure attack in a patient with anatomically narrow angles who does not have a patent iridectomy 4-As with closely related tricyclic antidepressants, clomipramine should be used with caution in the following:Hyperthyroid,increased intraocular pressure, a history of narrow-angle glaucoma, or urinary retention, ,tumors of the adrenal medulla (e.g., pheochromocytoma, neuroblastoma),significantly impaired renal function.

1-Prior to elective surgery with general anesthetics, therapy with clomipramine should be discontinued for as long as is clinically feasible, and the anesthetist should be advised. 2-Caution is indicated in treating patients with known liver disease, and periodic monitoring of hepatic enzyme levels is recommended in such patients. 3-Sexual Dysfunctio and Weight Changes may occure 4-A variety of withdrawal symptoms have been reported in association with abrupt discontinuation of clomipramine, including dizziness, nausea, vomiting, headache, malaise, sleep disturbance, hyperthermia, and irritability