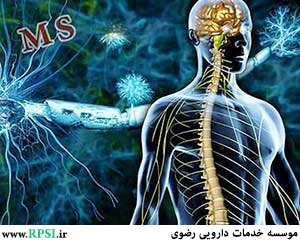 Causes, incidence, and risk factors
Multiple sclerosis (MS) affects women more than men. The disorder is most commonly diagnosed between ages 20 and 40, but can be seen at any age.
MS is caused by damage to the myelin sheath, the protective covering that surrounds nerve cells. When this nerve covering is damaged, nerve signals slow down or stop.

The nerve damage is caused by inflammation. Inflammation occurs when the body's own immune cells attack the nervous system. This can occur along any area of the brain, optic nerve, and spinal cord.
It is unknown what exactly causes this to happen. The most common thought is that a virus or gene defect, or both, are to blame. Environmental factors may play a role.
You are slightly more likely to get this condition if you have a family history of MS or live in an part of the world where MS is more common.

Symptoms
Symptoms vary, because the location and severity of each attack can be different. Episodes can last for days, weeks, or months. These episodes alternate with periods of reduced or no symptoms (remissions).
Fever, hot baths, sun exposure, and stress can trigger or worsen attacks.
It is common for the disease to return (relapse). However, the disease may continue to get worse without periods of remission.
Because nerves in any part of the brain or spinal cord may be damaged, patients with multiple sclerosis can have symptoms in many parts of the body.

Signs and tests
Symptoms of MS may mimic those of many other nervous system disorders. The disease is diagnosed by ruling out other conditions.
People who have a form of MS called relapsing-remitting may have a history of at least two attacks, separated by a period of reduced or no symptoms.
The health care provider may suspect MS if there are decreases in the function of two different parts of the central nervous system (such as abnormal reflexes) at two different times.

A neurological exam may show reduced nerve function in one area of the body, or spread over many parts of the body. This may include:
• Abnormal nerve reflexes
• Decreased ability to move a part of the body
• Decreased or abnormal sensation
• Other loss of nervous system functions
An eye examination may show:
• Abnormal pupil responses
• Changes in the visual fields or eye movements
• Decreased visual acuity
• Problems with the inside parts of the eye
• Rapid eye movements triggered when the eye moves

Tests to diagnose multiple sclerosis include:
• Lumbar puncture (spinal tap) for cerebrospinal fluid tests, including CSF oligoclonal banding
• MRI scan of the brain and MRI scan of the spine are important to help diagnose and follow MS
• Nerve function study (evoked potential test)
Treatment
There is no known cure for multiple sclerosis at this time. However, there are therapies that may slow the disease. The goal of treatment is to control symptoms and help you maintain a normal quality of life.
Medications used to slow the progression of multiple sclerosis are taken on a long-term basis, they include:
• Interferons (Avonex, Betaseron, or Rebif), glatiramer acetate (Copaxone), mitoxantrone (Novantrone), and natalizumab (Tysabri)
• Fingolimod (Gilenya )
• Methotrexate, azathioprine (Imuran), intravenous immunoglobulin (IVIg) and cyclophosphamide (Cytoxan) may also be used if the above drugs are not working well
Steroids may be used to decrease the severity of attacks.
Medications to control symptoms may include:
• Medicines to reduce muscle spasms such as Lioresal (Baclofen), tizanidine (Zanaflex), or a benzodiazepine
• Cholinergic medications to reduce urinary problems
• Antidepressants for mood or behavior symptoms
• Amantadine for fatigue
For more information see:
• Neurogenic bladder
• Bowel retraining
The following may also be helpful for people with MS:
• Physical therapy, speech therapy, occupational therapy, and support groups
• Assistive devices, such as wheelchairs, bed lifts, shower chairs, walkers, and wall bars
• A planned exercise program early in the course of the disorder
• A healthy lifestyle, with good nutrition and enough rest and relaxation
• Avoiding fatigue, stress, temperature extremes, and illness
• Changes in what you eat or drink if there are swallowing problems
• Making changes around the home to prevent falls
• Social workers or other counseling services to help you cope with the disorder and get assistance (such as Meals-on-Wheels)
For more information about living with MS, see: Multiple sclerosis - at home
Household changes to ensure safety and ease in moving around the home are often needed.

Expectations (prognosis)
The outcome varies, and is hard to predict. Although the disorder is chronic and incurable, life expectancy can be normal or almost normal. Most people with MS continue to walk and function at work with minimal disability for 20 or more years.
The following typically have the best outlook:
• Females
• People who were young (less than 30 years) when the disease started
• People with infrequent attacks
• People with a relapsing-remitting pattern
• People who have limited disease on imaging studies
The amount of disability and discomfort depends on:
• How often you have attacks
• How severe they are
• The part of the central nervous system that is affected by each attack
Most people return to normal or near-normal function between attacks. Slowly, there is greater loss of function with less improvement between attacks. Over time, many require a wheelchair to get around and have a more difficult time transferring out of the wheelchair.
Those with a support system are often able to remain in their home.

Complications
• Depression
• Difficulty swallowing
• Difficulty thinking
• Less and less ability to care for self
• Need for indwelling catheter
• Osteoporosis or thinning of the bones
• Pressure sores
• Side effects of medications used to treat the disorder
• Urinary tract infections
Calling your health care provider
Call your health care provider if:
• You develop any symptoms of MS
• Symptoms get worse, even with treatment
• The condition deteriorates to the point where home care is no longer possible