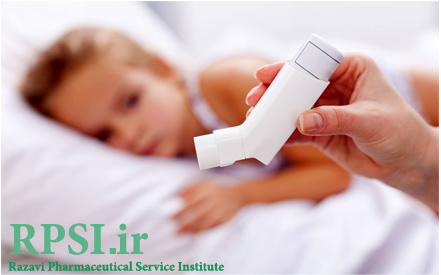 What is asthma in children?

Asthma is a chronic inflammatory disorder of the airways, characterized by recurrent, reversible, airway obstruction. Airway inflammation leads to airway hyperreactivity, which causes the airways to narrow in response to various stimuli, including allergens, exercise, and cold air.

How common is asthma in children?

Asthma is the most common chronic disease of childhood. The prevalence of asthma is increasing. This is also the case with other allergy conditions, including eczema (atopic dermatitis), hay fever (allergic rhinitis), and food allergies. According to recent CDC data, asthma affects approximately 8.5% of the pediatric population in the U.S., or more than 7 million children. Asthma accounts for more school absences and more hospitalizations than any other chronic condition in this country.

What are the signs and symptoms of asthma in children?

The most common symptoms of childhood asthma are coughing and wheezing.

Other common symptoms include:

Symptoms are often worse with exertion or during the night. Night cough is also common. Symptoms are also typically exacerbated by viral upper respiratory infections, and these viral symptoms can linger for weeks in children with asthma, whereas age-controlled counterparts tend to recover much sooner. Symptoms can also have a seasonal variation, which can be due to environmental allergies. Tobacco smoke commonly aggravates symptoms, and secondhand tobacco smoke is not only a risk factor for developing childhood asthma, but also complicates asthma control. Children with asthma often have a history of recurrent bronchitis or even a recurrent croup-like cough.

The physical exam in asthma is often completely normal. Occasionally, wheezing is present. In an asthma exacerbation, the respiratory rate increases, the heart rate increases, and children can look as if breathing is much more difficult. They may require accessory muscles to breath, and retractions of the chest wall adjacent to the ribs are common. Younger children may become lethargic and less interested in feeding. It is important to note that blood oxygen levels typically remain fairly normal even in the midst of a significant asthma exacerbation.

How is asthma in children diagnosed?

If the child is old enough, they may undergo testing to aid in the diagnosis of asthma. Spirometry is a breathing test to measure lung function and children can generally start performing proper technique for this testing around 5 years of age. Another test is exhaled nitric oxide (FeNO), which is a marker for airway inflammation, and this test may also be performed starting around 5 years of age. In younger children who cannot perform proper technique for lung function testing, impulse oscillometry is used to measure airway resistance. It should be noted, however, that this is a fairly involved test and it is rarely ordered in the diagnosis of pediatric asthma. The vast majority of younger children are diagnosed based on history alone.

Other objective measures to help in the diagnosis of pediatric asthma include using a peak flow meter, which can help to estimate lung function. Sometimes, testing for airway hyperresponsiveness (methacholine or mannitolchallenge) can help diagnosis asthma, again in older children capable of performing proper technique. Chest X-rays can sometimes be helpful to aid in the diagnosis of asthma. They may show hyperinflation, but are often completely normal. Allergy testing can also be helpful in diagnosis, since the risk of asthma is higher in children with sensitizations to common environmental aeroallergens. It is very important to recognize that a child can have poorly-controlled asthma despite completely normal lung function. Therefore, normal lung function does not preclude the diagnosis of asthma if a physician's clinical suspicion is high.

What is the treatment for asthma in children?

The goals for the treatment of asthma in children are to

A complete list of commonly used asthma medications is as follows:

There is often concern about potential long-term side effects for even inhaled corticosteroids. Numerous studies have repeatedly shown that even long-term use of inhaled corticosteroids has very few if any sustained clinically significant side effects, including growth in children. However, the goal always remains to treat children (and adults) with the least amount of medication that is effective.

Asthma medications can be administered via nebulized solution, which requires no technique and is very helpful in young children (often under 5 years of age). Around 5 years of age, children can transition to inhalers either with or without an aerochamber and/or a mask. It is important to note that if an individual has proper technique with an inhaler, the amount of medication deposition in the lungs is no different than with using a nebulized solution. When prescribing asthma medications, it is essential to provide the proper teaching on proper delivery technique.

Although the vast majority of children with asthma are treated as outpatients, treatment of severe exacerbations can require management in the emergency department or inpatient hospitalization. These children typically require use of supplemental oxygen, early administration of systemic steroids, and frequent or even continuous administration of bronchodilators via a nebulized solution. Children at high risk for poor asthma outcomes should be referred to a specialist (pulmonologist or allergist). Children with the following factors may be at high risk:

What is the prognosis for asthma in children?

The prognosis is best in young children who wheeze with viral respiratory infections and who have no symptoms in between these episodes. It can often be difficult to differentiate these “early wheezers” from children with true asthma. Children with recurrent symptoms tend to have ongoing asthma later in life. Boys “outgrow” asthma more often than girls, and a child with no evidence of environmental allergies has a better chance of “outgrowing” asthma as compared to a child with concurrent allergic disease (hay fever). Even in children with ongoing asthma, prognosis is excellent for those with preserved activity level and lung function through the use of appropriate medications.

Can asthma in children be prevented?

With the increasing prevalence of asthma, numerous studies have looked at risk factors and ways to potentially prevent asthma. It has been shown that children living on farms are protected against wheezing, asthma, and even environmental allergies. The role of air pollution has been questioned in both the increased incidence of asthma and in regards to asthma exacerbations. Climate change is also being studied as a factor in the increased incidence of asthma. Maternal smoking during pregnancy is a risk factor for asthma and poor outcomes. Secondhand tobacco smoke is also a significant risk factor for development and progression of asthma. Up to 50% of children who experience significant respiratory syncytial virus (RSV) infection are eventually diagnosed with asthma. Evidence suggests that the risk of asthma is reduced in children with a history of certain infections, rural living, exposure to other children (including older siblings), and less frequent use of antibiotics. The development of asthma is ultimately a complicated process influenced by many environmental and genetic factors, and therefore there is no proven way to decrease a child's risk of developing asthma.